Thanks to my friend, Vanessa who informed me that Hada Labo was giving away a 9ml Moisturising sample for those who registered. I registered out of fun.

Few weeks ago, I received the sample which I’ve totally forgotten. Can you believe that they sent it via post? I thought we would have to go to some counter to collect it, I was waiting for a SMS or something. Instead, they mailed it. Right to your doorstep. Awesome service.

In the envelope, I also received a leaflet with a code. It says that the code will entitle me to some discount on the products. Sorry, I can’t remember how much discount I got. Hahahahaha. I threw the leaflet after I made my purchase. :P I think it was either 20% or 30% off the normal price.

I was surprised to see that the prices of the products are relatively reasonable and affordable. I’m not interested in the whitening and lifting range, and I’m a bit allergic to AHA+BHA. So, I only concentrate on their moisturising range.

My Clinique cleansing oil finished few months ago, am now using the cleansing foam which I bought in Korea and it is also finishing. So I thought might as well try Hada Labo’s cleansing oil. It’s only RM35 after discount! No harm trying.

I am very particular with facial wash. I’ve tried other brands but I would always go back to Clinique. Other brands are either too oily or  too dry, only Clinique’s liquid facial soap has that “just right” feel. The best part is, one bottle of 200ml can last me for more than 9 months. :D Thinking of giving this Hada Labo Moisturising Face Wash a try. Since it says that it is moisturising, guess it couldn’t be that bad. After discount, I only paid RM20 for it. DIRT CHEAP!

Four products, only costs me RM135! I could hardly buy 2 products in Clinique with that money!

I didn’t purchase the hot selling Moisturising Lotion though. I am already using SKII Treatment Essence and Clinique’s Repairwear Laser Focus serum, don’t feel like stopping them. If I were to add the lotion in, gosh, how many products I have to put on my face?!

I started buying from Victoria’s Secret online since 2 years ago. I was so on the cloud nine when I know they ship to Malaysia. :D Earlier this year, when I saw a Victoria’s Secret outlet in Pavilion KL, I was so delighted! However, I got so disappointed when I stepped in. They only sell bags, make-up, accessories, perfumes, body care and some panties!!! No swimwear, no lingerie, no sleepwear! My goodness…… What Victoria’s Secret outlet is that if it doesn’t sell lingerie?????? I can’t believe it!

So, go back to buying online then. :|

All the while, I always received my items weeks earlier than the expected arrival date. Was so happy with their efficiency and service.

This time, I did not receive the package 3 weeks later. Then I remember, perhaps the Sandy storm got everything delayed. So I waited for another 2 weeks. I still did not receive my package by the expected arrival date. :(

Wrote an email to VS’s customer service, got a reply within a day! Best of all, they offered a refund or a replacement order! No questions asked! Such a reliable merchant is really rare these days.

That was really nice of them to trust their customers completely. Who knows, some people may just lie that they did not receive the package just to get a second order at no cost at all, or a refund!

In my case, I genuinely did not receive my package ok. :)

Now, the replacement order is on its way. Hope I would be able to receive it this time. (Really love the bra top camisole that I bought last year, and I bought another 3 this time.) Keeping my fingers and toes crossed! 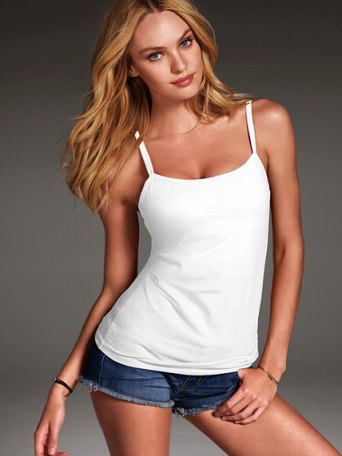 Bra top cami with shelf bra. So, so, so comfortable! After discount, US$9.50/piece.

At this golden age of internet, you just can’t deny how convenient it is to shop online. Sundry goods, fashion, toys, baby stuff, household, almost everything…… Delivered to your doorsteps.

I’ve had bad experience with online shopping previously, so I now choose the seller carefully. Been frequenting this online seller for few times, so far so good. She has 2 brands, one is more expensive, another is of lower range, cheaper but quality is compromised too.

Bought another 2 from the same seller, was checking my parcel last night. The T-shirt that I bought, has some tiny yellow dots on left and right shoulders and chest area. They are so obvious. :( Then, the side of the t-shirt is not sewn! It is only sewn briefly below the sleeves!!! Meaning if you wear, you have to either wear another tank top beneath or you will risk showing your boobs and tummy to everyone. Hahahaha.

Oh crap. Living in Malaysia, meaning it’s hot weather all year round. To wear another layer of clothes is something that I do not like. So yeah, seeing that this t-shirt has so many cacat-ness (pardon my Malay-English if you do not understand), I wouldn’t be wearing it. I told Andrew, the Hello Kitty is cute though, maybe use it as a floor mat in our future home. Hahahahahaha…… :P

The side is not sewn. 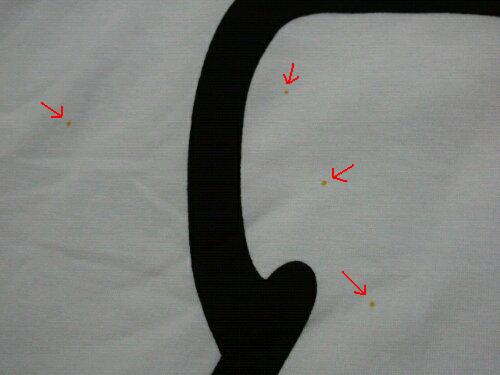 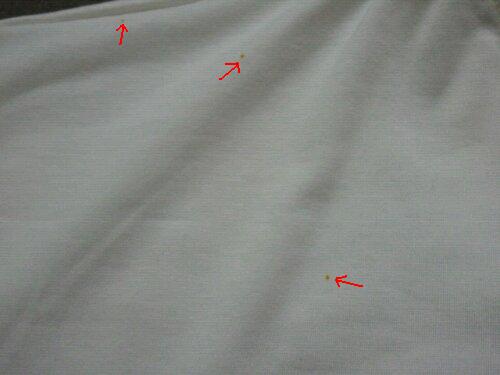 In my previous post, if you’ve read, I’ve bought a blue dress for RM167. Andrew was a bit surprised with the price, but he is always very sweet to say “as long as you like it, it’s ok, and by the way, it is pretty”. He has never tried to stop me from buying anything, he would only ask if I needed it.

I’d buy cheaper clothes too, if they’re nice. I’ve even tried online-shopping. My last online-shopping experience wasn’t a good one. I was so disappointed. I’ve bought 9 pieces of tops and dresses altogether, amounting to RM261. Guess what, only 3 of them are wearable! That is sad, isn’t it? RM261 for 9 pieces is VERY cheap. But when you could only wear 3 of them, you do the maths. Out of that 3 pieces, one T-shirt, one off-shoulder blouse and one cotton dress. The rest of them, bad quality, poor workmanship, way too different from the photos on the web, sizes are not consistent with what mentioned on the web too. Shall post the photos of them when I have the courage to look at them again. Now whenever I see them, I feel sad. Can’t wear them nor give them away. They are so bad I wouldn’t want another person to feel that I’m giving them unwanted bad stuff. I may sound a little exaggerating, but one thing could prove that they’re really bad. Tried all of them on and showcased to Andrew, he has never said a word except smiling. Oh well, perhaps one word he did say when I asked if it looked nice, “OK” was his only answer.

So now, you tell me, would you rather spend RM261 for 3 casual simple clothes? With that RM261, I could get a pretty dress from Miss Selfridge and a nice top from Dorothy Perkins which I could wear to work. Most importantly, I know I am going to wear them!

Okay, I am finding excuses to justify my shopping spree. LOL!

In the past, I hardly had the chance to go to Seremban. But this year, within a month, I travelled to Seremban twice. And today, I went to Seremban for the 3rd time. Hahaha. But today it was for work.

I got Irene’s website from the Facebook advertisement. Went in to have a look, found that she got more choices there. Found a few that I liked, but I couldn’t spend unnecessary anymore. At the end, I bought 2 dresses from Irene. Going to wear one of them to a friend’s wedding.

Bought this from Irene. Love the colours!

For the other one, I haven’t got it yet. There is some minor mistake, Irene mixed up with the other customer’s dress. LOL. The one I got is a green dress which is not what I ordered. I’m going to courier the dress to her customer tomorrow. Hope that I could get my dress next week.

Despite the small hiccups, I find that Irene is good. Efficient and more friendly in dealing with her customers. I’m not polishing her shoes in order to get some good discounts. This is just my review and experiences. If you do not think the same, that’s ok.

The material for the dress shown above is chiffon. It’s quite comfortable to wear. The dress is a bit short for me, but guess I could still wear this to work on a Friday. One thing quite funny is, the zip is on the right side of the dress! Normally the zip would be at the left side for a dress, easier for us ladies to zip. It took me quite a while to pull the zip by using my left hand. Other than that, it is a nice dress overall. The colours are sweet.

Guess I’ll be buying from Irene again. Hahaha. Not so soon though, I have too many dresses now! Can’t wait for the other dress next week!

Have been waiting for the approval of my EPF withdrawal since more than 3 weeks ago. The withdrawal is to settle the downpayment of our new house. Andrew has got his last week. Called KWSP last week for mine, was informed that mine still waiting for approval.

This morning, logged in to my savings account to check again (yep, I’ve been checking it every alternate day). TA DA! The money has been wired to my account yesterday!!! Yyyyyaaaaaayyyyyyyy!!! Okay, the money isn’t for me to spend, why am I so happy? Of course I’m happy, another thing settled and I don’t have to worry about it anymore. Next thing to settle is the monthly installment to the bank.

Another happy thing is, the dresses that I bought online have finally arrived!!! The colors are gorgeous and the material looks fine too. I was worrying about the mismatch of material and colors. Looks like I worried too much. They are quite cheap, RM65.90 each, free delivery for purchase of 2 and above. Going to try them on later when I have the chance.

Today is definitely a happy day, and it’s FRIDAY!!! Too bad that Andrew is working night shift, no one can company me tonight.

Tomorrow am going to meet some friends in Mid Valley Megamall. I AM SO EXCITED!

Thought of wanted to wear some nice little dress, but then I’ll be bringing my chunky camera bag. That’s the price we have to pay. Bring the camera then no nice dress, wear nice dress then don’t bring the camera. Argh……