The night before, we discussed and planned to have our breakfast at 7.30am so that we could start our day earlier. Please note that during winter in Taipei, the day starts like 5am or 6am and it gets dark by 5pm. It is advisable to start your day as early as possible. But us, been lazying around and taking our own sweet time to have our breakfast, we usually went out around 9am during our stay in Taipei. LOL! That was very late if you asked me.

After our breakfast in Rainbow Hotel, from Ximending MRT station, we took the red line to Shilin (士林站) station. We were having some trouble with getting on the right bus to Yang Ming Shan (阳明山). We went across the street, asked the locals (they didn’t seem to know well too), then came back to the station, then walked another 5 minutes from the MRT station…… @__@ It was hot that morning, I even felt like taking off my long sleeves! LOL! We waited for the Red 5 bus beside a gas/petrol station. Sorry that I can’t remember the gas station’s name. I can’t remember how much the bus fare is since we were using the Easy Card.

I was so impressed with the bus! Yes, bus! The bus could go on smoothly despite the steeply winding roads. If it were to be in Malaysia, I’d bet you could see all the smoke from the bus and it would just slide downhill. Hahaha.

Enough of sidetracking. :D There we were, reached YMS safe and sound. It was funny to see the tourism centre in YMS is closed. Then we saw a group of aunties were queuing waiting for a bus. It was then we realised we could take the shuttle bus to go to various places of interest in YMS. There were so many attractive places, but there is this particular place with an interesting name that caught our attention. Xiao You Keng (小油坑), it literally means little oil pit. Actually it is a place full with sulfuric acid and gas. The view of it from afar has got all of us ooh-ing and wow-ing. Now I shall let the photos speak. Scroll down for some photos. We didn’t go to other places in YMS as the weather became cold and the haze was getting heavier. It is also advisable to wear layers of clothes instead of thicker clothes. The weather is pretty unpredictable in Taipei during winter. Wearing more layers allows you to take off some when it is warm.

From YMS, we took the same Red 5 bus back to Shilin station. Then we took MRT red line to Beitou (北投) station. You have to disembark in Beitou station and then change to another train to get to Xin Bei Tou (新北投). We were so hungry at that point of time, walked around and then we found this restaurant, the food was amazingly delicious! We were so busy and engrossed in eating and we forgot to take a photo of the restaurant and its name. -__- Bummer! But I remember how to go that place. :) It’s easy, after exit the MRT station, walk towards the KFC fast food restaurant then turn left. Walk straight and you shall see this restaurant selling the pork rice and noodles.

After a satisfying lunch, we moved on to the hot spring. All of us were lazy to walk after a heavy meal, we just made a tour to the Xin Bei Tou Hot Spring Museum. We didn’t make it to the Geothermal Valley (地热谷) and didn’t get ourselves soaked in the hot spring. Another bummer. Blame it on our lazy legs. Hahaha.

Another reason we dropped the hot spring was because the sky was getting dark, we were rushing to our next planned destination, Dan Shui (淡水) and Fishermen Wharf (渔人码头). You need to get back to the Bei Tou MRT station and then take the red line all the way to Dan Shui. After you exit the Dan Shui station, walk towards your left then walk along the river then you will reach the Dan Shui old street (淡水老街). You can find the famous Ah Poh Tie Dan (阿婆铁蛋) along the street too. The day got dark faster than we expected. We dropped the idea of taking the ferry to the Fishermen Wharf. Argh, 3rd bummer in a day!

We went to Shilin Night Market (士林夜市). Take the MRT Red line to get to the Jian Tan station (剑潭). Shilin is just across the road. But please be mindful that Shilin night market is very big. You may also take the exit at Shilin station. We all were crazy eating and shopping in Shilin.

Our healthy breakfast in Rainbow hotel.  :) 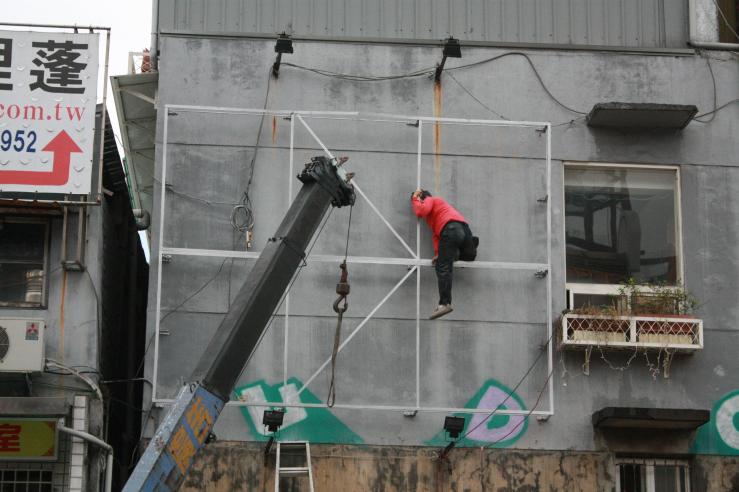 We have seen a lot of workers in Taiwan working on higher ground without any safety equipment. *Salutes*

The shops right beside of the Shilin MRT station. 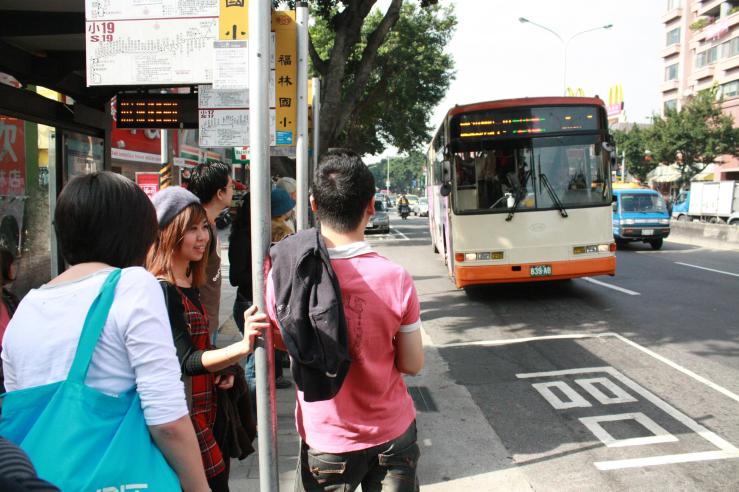 In Yang Ming Shan entrance, waiting for the shuttle bus to various places of interest in YMS. 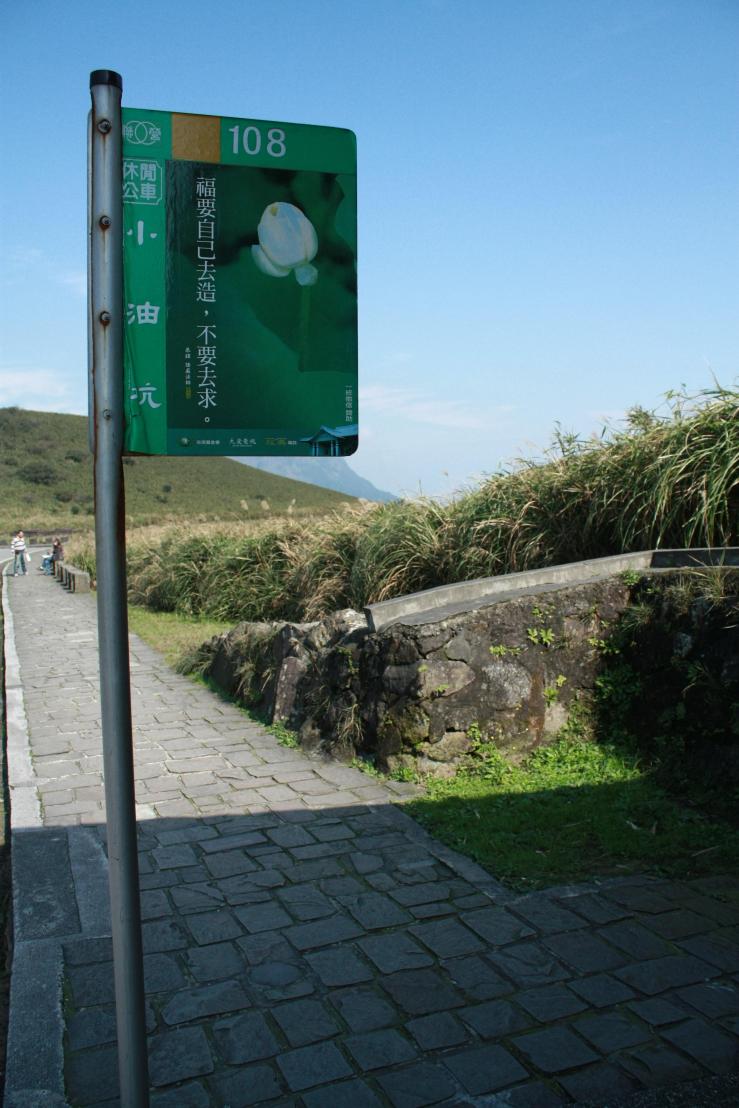 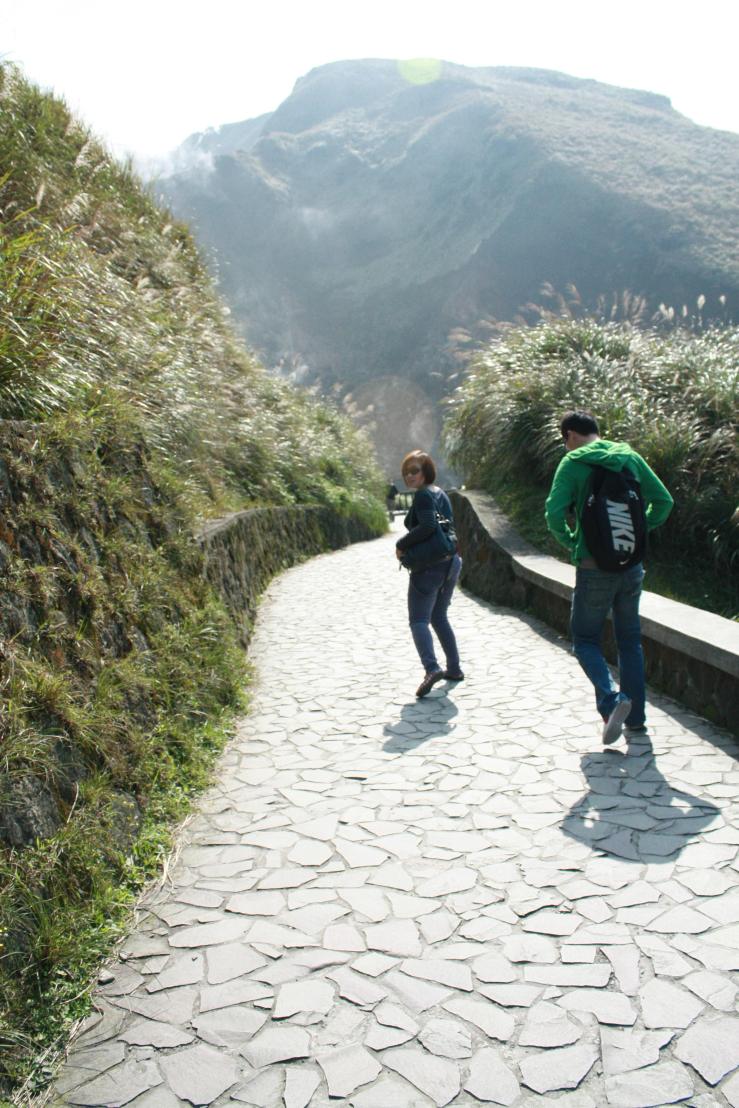 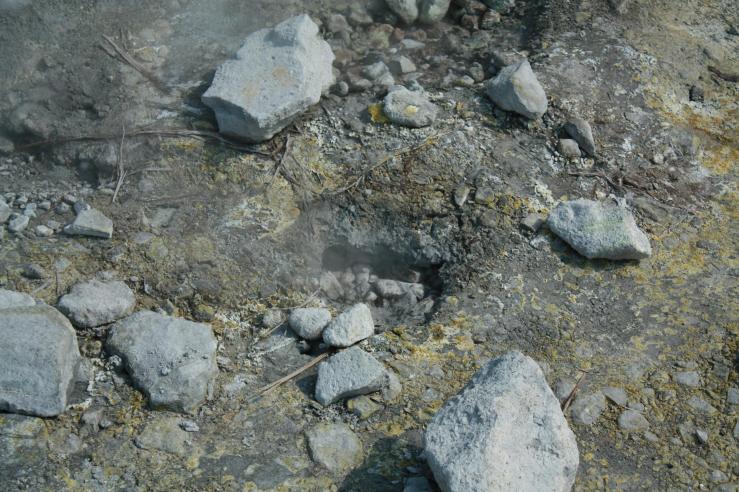 The place smells of sulfur. 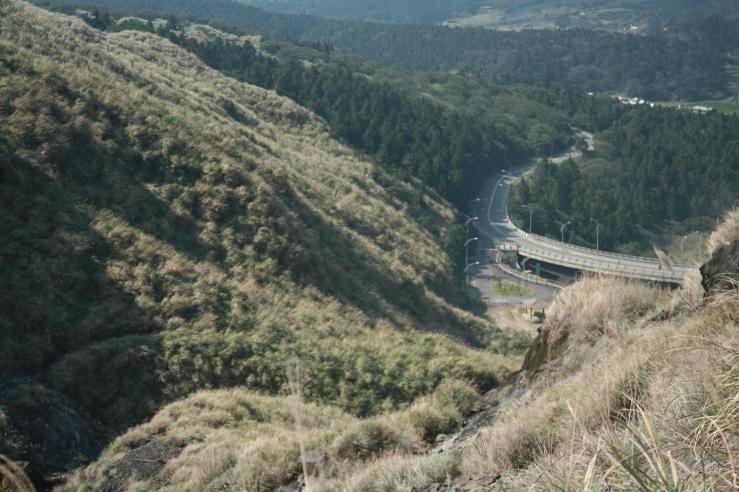 The view is awesome! 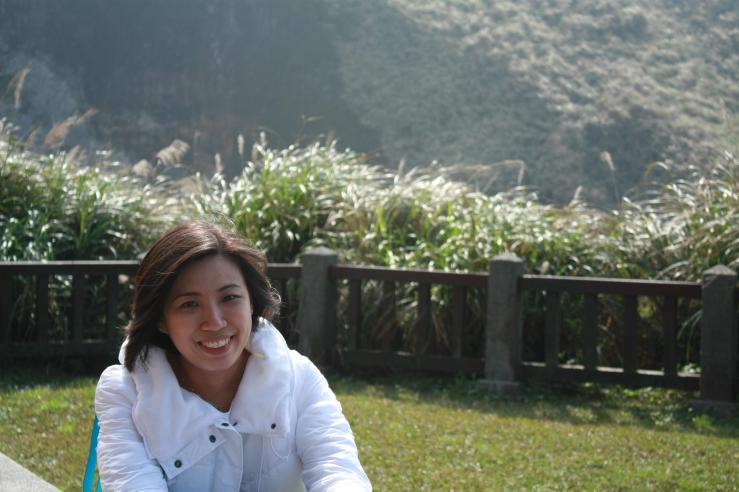 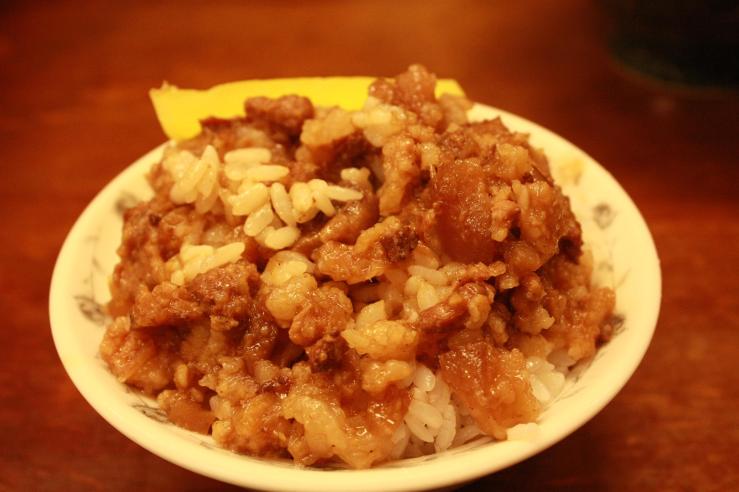 This is from the shop that I mentioned above. The braised pork rice. 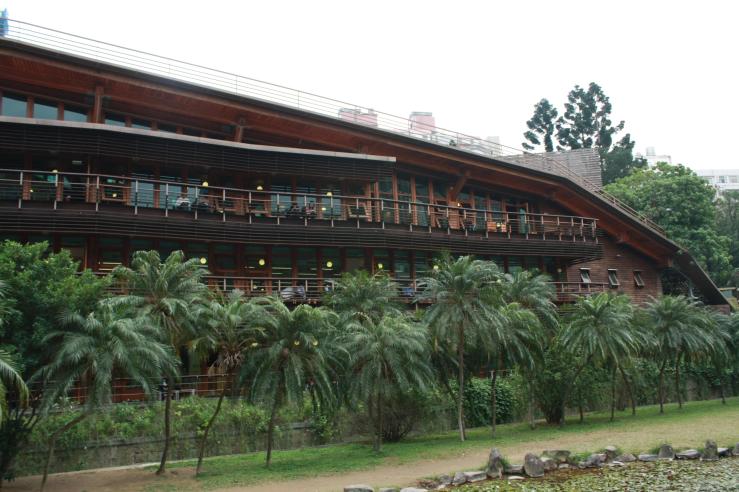 This is a library oh!

This washroom is so cute! 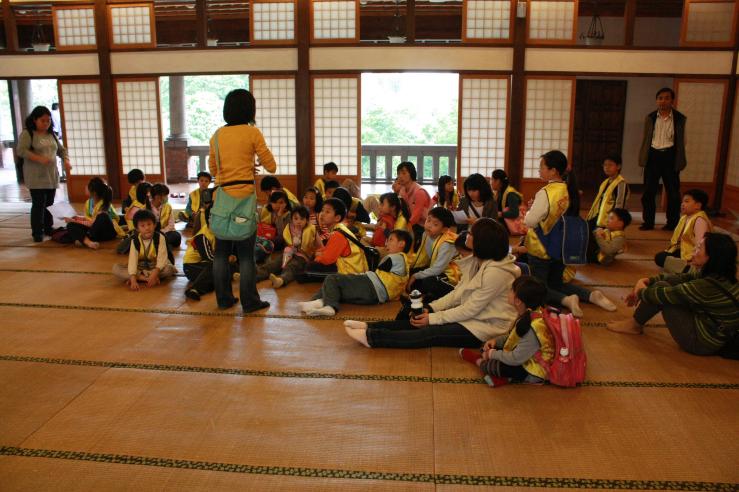 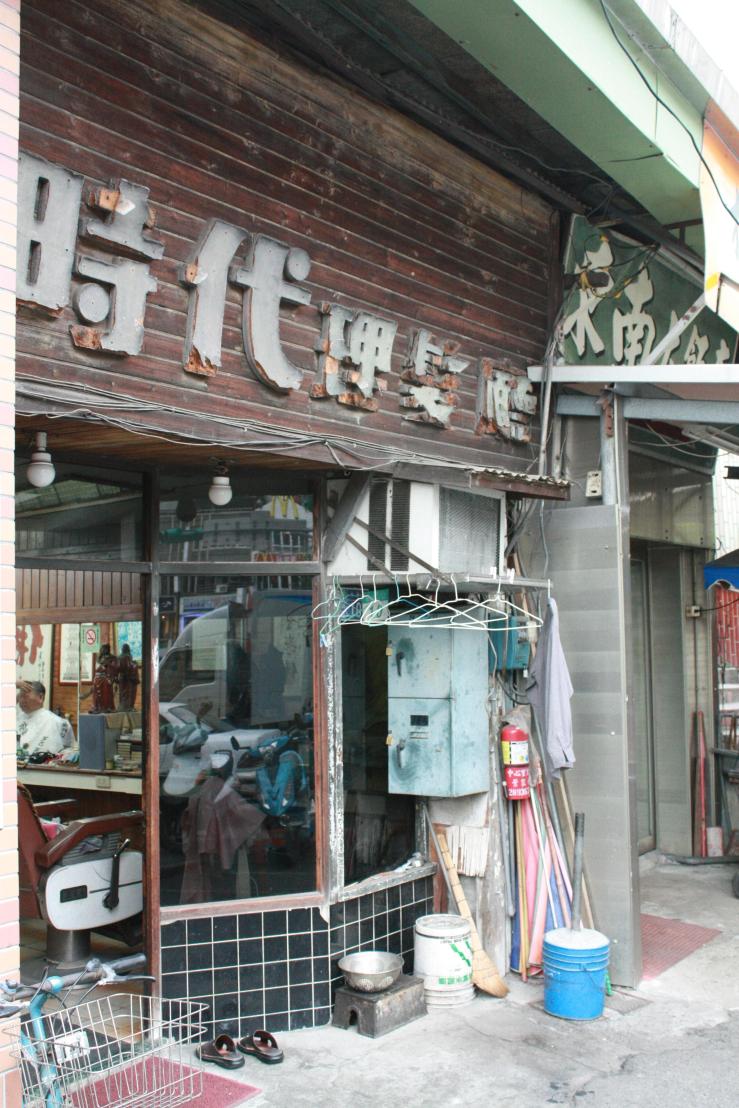 The temperature wasn’t that low. But it was cold as it was windy.

Enough with Danshui, here we are, in Shilin night market 士林夜市. 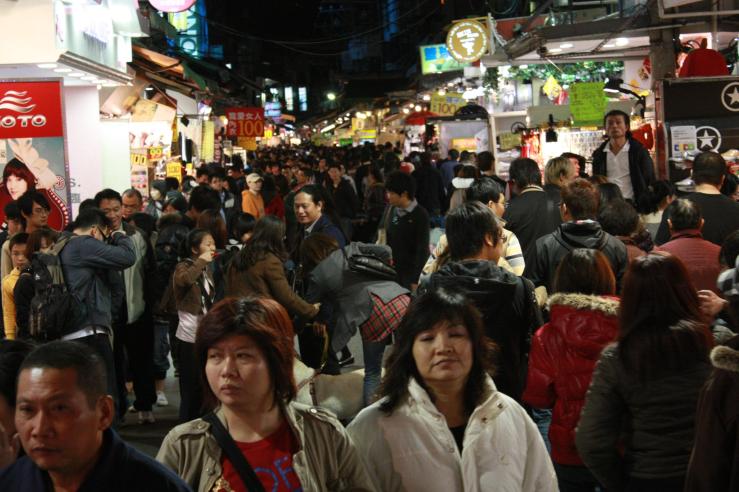 Shilin is always crowded! Although the price in Shilin is quite expensive compared with those in outskirt areas, we still love Shilin. :)